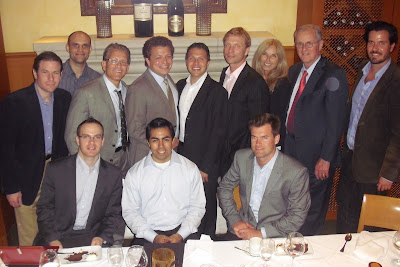 (Disclaimer: The opinions included in the following posting belong to me and do not necessarily reflect those of Cove Street Capital “CSC” or any of its employees. The information in this posting should not be considered as a recommendation to buy or sell any particular security or to encourage anyone to invest with CSC. Past performance of CSC is not a guarantee or indicator of future results.)

I recently had the distinct pleasure of co-hosting a charity idea dinner with my friend Alex Rubalcava of Rubalcava Capital Management. Alex is on the board of an incredible organization named South Central Scholars (SCS) and he asked me to help him plan the event. Right off the bat, I really liked the idea of participating in an event that involved two things that are quite important to me: investing and education. If you ask me what the one major threat to the continued prosperity of the United States is, my immediate response would surround my concern for the state of public education in America. As such, I gladly offered to help plan and promote an event that had the goal of raising money for underprivileged students and also provided an opportunity to talk about investing.

The format was simple: attendees were asked to contribute a charitable donation to SCS in exchange for a three course meal and exposure to the investment ideas of some of the brightest minds in Southern California.

Also attending as an interested observer was Chuck Gillman of Boston Avenue Family Office. Finally, there were a number of people who were kind enough to donate but were unable to attend: John Schwartz (organizer of the Value Investing Congress), Lance Helfert of West Coast Asset Management (my former employer), Alan Schram of WellCap Partners, Dan Anglin of Prince Henry Group, and John Dash of Dash Acquisitions.

Most importantly, we were privileged to have the founders of SCS, Dr. Jim London and his wife Trisha, at the event. I personally found it motivating to see how two people who were inspired by a book (And Still We Rise by Miles Corwin) could turn a little idea into an impactful organization. Furthermore, I really enjoyed listening to Jose Rodriguez, a member of the SCS alumni community who shared real life anecdotes about the difference that SCS has made in his life. The value proposition of SCS becomes much more real and relevant when you meet someone who has directly benefitted from the work of the Londons and all of the other supporters of SCS.

Alex and I wanted to thank everyone for helping SCS achieve its goals. It was a wonderful night and I feel very fortunate to have had the chance to be involved with helping to raise money for such a great cause.

In addition, aside from acknowledging the generous participants of the event, the purpose of this post is to increase awareness of SCS. I know that many of the people who read this blog are not from California—or even from the US— and may not be particularly concerned about the plight of kids from South Central LA. Clearly, there are serious problems and deserving charities in every country around the world. As such, my hope in discussing the merits of SCS is not necessarily to entice people to contribute to this specific cause. If you think the value that SCS adds to the LA community is worthwhile, by all means I encourage you to become involved or help the organization raise money. But, for everyone else who would rather support causes a little closer to home, my hope is that the details of this event and description of SCS encourage you to look for ways to reach out to the educational community in your home state or country.

As mentioned above, SCS was founded by Dr. London and his wife after reading about the difficulties hard-working students from South Central LA were having escaping blighted neighborhoods and going to college. Accordingly, the goal of SCS is to help motivated high school students from inner city schools become successful in college and graduate school. These talented students are often from dysfunctional families and communities impacted by drugs and violence. Sadly, the high schools in such areas often only graduate 25% of their students and even those who do graduate may not have the financial means to attend college or are not aware of their options.

This is where SCS steps in to provide information, outreach and financial support to students from 39 high schools in the area. The main strategy is to try to get the strongest students to apply to private colleges, specifically the Ivy League schools and other small liberal arts colleges. The reason for this focus is that these schools are not only some of the top schools in the US, but they also provide the most generous financial packages; with some even guaranteeing that students will not graduate with any student loan debt. Once they are in college, SCS supports these students and their goals by:

It is hard to argue that giving these students the opportunity to go to college is not a worthy goal. In fact, the success of SCS makes the organization and ones like it look compelling destinations for charitable donations. But, anyone who approaches the world from an investor’s point of view likely wants to get the most bang for his or her buck. There are thousands of deserving charities out there. So, why is SCS any more deserving than the others? Well, given that I believe a failing educational system represents a real threat to this country’s long-term prosperity, what sold me on SCS was its ability to scale. When I asked the question about what prevented SCS from providing yearly bridge scholarships to 200 or 500 students instead of 74, the answer had nothing to do with personnel, staff or overhead. Simply, what prohibits SCS from expanding is funding. My understanding is that a large percentage of every dollar that SCS receives ends up supporting students as opposed to bloated infrastructures or administrative salaries. Further, after meeting a group of board members and founders whose only concern is helping underprivileged students, I became very comfortable making a donation.

Thus, if you share some of my concerns about the American educational system and want to donate or become involved, please visit SCS’s website at southcentralscholars.org. On that site you can find a place to make online donations and can learn more about volunteering opportunities or becoming an employer of these gifted students. I hope you will consider helping SCS expand its reach. If you have any questions or comments, please feel free to contact me or info@southcentralscholars.org.