Still on the path to a depression? Some of the most interesting charts for investors to review are those that compare the trajectory and depth of our current economic quagmire with those of the Great Depression period. Remember, people who lived through that time didn’t know they were in the middle of what would come to be known as the Great Depression. Only in hindsight was the carnage so clear. So, when I see ongoing trends that are worse than those that occurred during that period it reminds me that there are still some very real risks out there despite the fact that just about everyone now claims that a very draconian scenario is off the table. For an example, check out this piece from Thought Offerings:

To me, the clearest value in these charts is yet one more piece of evidence that this recession/depression is very comparable to the Great Depression, despite the claims of many people that this period is "nothing like the Great Depression." And I did check the data for the years since WWII and found no other dividend declines near as large as today's, so this is not a normal recession pattern.

Deadly deflation-inflation combo: In a recent post I suggested the possibility that the US consumer could experience price increases in certain items concurrent with wage and asset deflation. At that point many people mentioned to me that they believed that such a scenario was impossible. However, whether you consider volatile gas, food and commodity prices core or not, in essence, this is exactly what Americans are facings as job losses continue and the cost of everyday items and health care rise unabated. Now, if the recovery/reflation trade dies, the price of oil and commodities may fall precipitously. But, as this article in Seeking Alpha points out, right now we are seeing an insidious combination of inflation and deflation:

Consider this, it appears to me that the country’s top quintile of wage-earners (the folks with the most assets) are experiencing deflation as their home prices have collapsed, their 401K’s are substantially below where they were in October 2007, their bonuses have been “whacked,” and the list goes on.

So, what can we do to protect ourselves? Well, this author thinks the answer is to invest in stocks:

So how do we invest currently? Well if past is prelude, we think large-cap, dividend-paying stocks are the investments of choice. As can be seen in the attendant chart, in this market, like all new bull markets, and according to Dow Theory this is a new bull market, the small-caps have performed the best since the March lows. From here, however, large-caps tend to play catch up. Consequently, we are buyers of large-caps on the belief that if we get a correction the large-cap, dividend-payers should correct less.

Dismiss the words of Albert at your own peril: Hat tip to Zero Hedge for posting these comments from Albert Edwards of Soc Gen. As I have written previously, Albert is still in the deflation camp and seems incredulous that people are investing as if the largest credit bubble in the history of the world didn’t just burst. Don’t say you haven’t been warned:

It’s almost as if the biggest credit bubble in history never occurred. Investors are increasingly convinced that a sustainable global recovery is emerging out of the wreckage. All praise to the central bankers (and Gordon Brown) for saving the world! I’m waiting till someone writes about the return of The Great Moderation and suggests Ben Bernanke is the new Maestro. Then I’ll know the lunatics have taken over the madhouse…..yet again!

My advice is to be careful. I am not an expert on such matters but somehow I assume that a reflation trade would die a quick and unceremonious death if and when actual core deflation sets in:

But it is collapsing core inflation that poses the greatest risk to the global economy going forward. We highlighted last week that core CPI inflation descends rapidly, with a lag, after the recession ends. If core US CPI inflation falls by around the 3% shown in the chart below over the next year, that will take the yoy rate to minus 1.5%! Hence the growth in nominal quantities (e.g. corporate revenues) is set to see disappointing “lower highs” in this upturn after lower lows. And that, in our view, is just a prelude to a 2010 collapse into outright deflation.

Fed+ QE= Stock market rally: Well, if one of the Fed’s goals when it decided to engage in quantitative easing was to breathe some life into the stock market, it has certainly succeeded. Take a look at the nearly linear relationship between the number of securities held on the Fed’s balance sheet and the S&P 500. Where has the liquidity gone? Into the stock market and S&P futures of course; courtesy of your favorite (former) investment or commercial bank.

The chart below requires no substantial commentary suffice it to say that since the launch of the Fed's Quantitative Easing, aka Monetization, program, the value of the Total Securities Held Outright on the Fed's Balance Sheet has increased by $917 billion- from $584 billion to $1.5 trillion. This has been accompanied by an almost linear increase in the S&P 500 Index, from 721 at QE announcement on March 18 to 1033 yesterday. This $917 billion in extra liquidity, instead of igniting an inflationary spark, as the QE program was designed to do, is now (metaphorically) sloshing around bank basements. 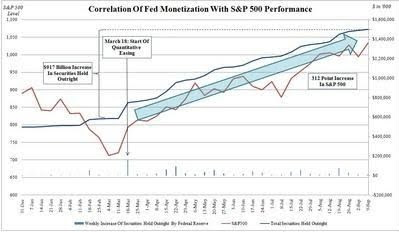 Improving ISM figures do not necessarily mean victory: In this piece, Nic Lenoir from ICAP points out that the ISM data is only one indicator of economic performance. So, we should be careful in declaring a full blown recovery based solely on this data:

I find truly fascinating is that we are already claiming victory. This recession is over, and even though growth will be subpar, we are led to believe all is well. The stock market certainly says so. Is the stock market a good indicator of economic prosperity? I don't know but it's not the point. The point of all this is to show that economic activity always front-runs consumer prosperity because governments somehow spur activity, whether it's through the private sector or themselves, every time the economy is in decline. So in a sense, the government uses the ISM or the stock market (both move in sync historically anyways) to assess its performance, and that is where it is dangerous, because as we discussed earlier ISM is only one component of economic prosperity. It is certainly necessary to have a strong production to have an economy that functions well, but at what cost?

But what are we risking in doing so? Well, if all we are doing is throwing liquidity at the problem and thus artificially propping up the economy, then we are setting ourselves up for an even bigger fall. In other words, if we aren’t willing to take some short-term pain to purge the excesses from the system, next time the crash may be even worse:

It's not banks that are too big to fail, it's our economy that can't tolerate shrinking for a few quarters. One thing is for sure propping the economy up because we can't tolerate volatility, whether it's in the GDP numbers or the stock market, is a very bad idea in the long term, and we have been doing it for a very long time. If it works this time it will be worst the next. By trying to fight volatility we are guarantying explosions of volatility far more painful than what would occur otherwise.

Short-termism is still a problem: Hat tip to Zero Hedge for posting this summary of a report from the Aspen Institute that was endorsed by investing luminaries such as Warren Buffet and Jack Bogle. The piece concludes that the focus on short-term performance goals that is so prevalent in corporate America has limited the country’s ability to attain long term growth. Well, that and causing the economic and financial crisis we find ourselves swimming in. Accordingly, they created a list of proposals that, if enacted, would be a step in the right direction to reverse this trend:

Their complaint is that the focus on short-term financial performance by investors, money managers and corporate executives has systematically robbed the economy of the patient capital it needs to produce sustained and vigorous economic growth. And while their recommendations may not be as sexy as a cap on Wall Street bonuses or a ban on high-frequency trading, they get to the root cause of the financial crisis in ways that other reform proposals have not:

-- An excise tax on all security trades and a higher tax rate on short-term trading profits.

-- A revised definition of the fiduciary duty that pension and mutual fund managers owe to their investors, along with compensation schemes that better align their incentives with long-term objectives.

-- A requirement that only long-term shareholders be allowed to elect directors or vote on corporate governance issues.

-- Fuller disclosure by private investment funds of their holdings and their compensation.

What’s that word again? Oh yeah, fiduciary. It means that you have a duty to protect your stakeholders and put their interests ahead of your own. It is a forgotten word and even worse, an ignored concept. Maybe one day we will believe in the merits of it again. But, my suggestion is don’t hold your breath.

The states are in deep trouble: Hat Tip to Zero Hedge for posting the link to this op-ed piece from the governor of Indiana. It the article he details the fiscal problems that are facing many states and suggests that we have not even begun to see the worst when it comes to their long run issues:

State government finances are a wreck. The drop in tax receipts is the worst in a half century. Fewer than 10 states ended the last fiscal year with significant reserves, and three-fourths have deficits exceeding 10% of their budgets. Only an emergency infusion of printed federal funny money is keeping most state boats afloat right now.

Most governors I've talked to are so busy bailing that they haven't checked the long-range forecast. What the radar tells me is that we ain't seen nothin' yet. What we are being hit by isn't a tropical storm that will come and go, with sunshine soon to follow. It's much more likely that we're facing a near permanent reduction in state tax revenues that will require us to reduce the size and scope of our state governments. And the time to prepare for this new reality is already at hand.

The problem is that the states don’t have Ben Bernanke to run the printing press. Many of them even are required to (gasp) balance their budgets. We need to address the short falls they are facing now before services get cut back so profoundly that it affects our quality of life:

Unlike the federal government, states cannot deny reality by borrowing without limit. The Obama administration's "stimulus" package in effect shared the use of Uncle Sam's printing press for two years. But after that money runs out, the states will be back where they were. Even if Congress goes for a second round of stimulus funding, driven by the political panic of bankrupt Democratic governors, it would only postpone the reckoning.

The time to plan and debate is now. This is a test of our adulthood as a democracy. Washington, as long as our Chinese lenders enable it, can practice denial for a while longer. But for states the real world is about to arrive.