The Potential Impact of Swine Flu on Productivity

With Q2 productivity figures being released today, I thought it might be interesting to take a look at the results and try to assess the trend in terms of sustainability. According to the data released by the Labor Department, in Q2 productivity increased at an annual rate of 6.6%, the most rapid increase in six years. The AP article points out that increased productivity often (in more normal times) leads to a higher standard of living as wages rise as output increases. However, these are not normal times. With unemployment at 9.4% (and counting) and businesses struggling as a result of the drop in consumer spending, it is unlikely that we will see increased wages any time soon. Plus, much of the gains in productivity were a result of drastic cost cutting that may have been prudent in the short run but could end up mitigating the strength of the eventual recovery. Therefore, it might be a bit premature to celebrate this impressive increase in productivity for a number of reasons.

Accordingly, the question going forward is whether these productivity gains are onetime events or are symbolic of an ongoing trend. One factor that may influence the outcome (at least over the next 2-3 quarters) is the swine flu. Let me remind you that I am not an economist so this is not meant to be anything more than a general assessment of the potential impact of H1N1. What I do know is that sick workers are not productive workers. In addition, people who are forced to stay at home, either because they are sick or they have to take care of sick children, certainly do not add to aggregate productivity.

Plenty has been written about the risks associated with an outbreak of swine flu. In his daily musings, David Rosenberg of Gluskin Sheff often cites H1N1 as one of the reasons he thinks the market could pull back. While I tend to agree with Rosenberg on a number of issues, I don’t think it is particularly useful to cite such a nebulous threat as a major risk without looking at some actual numbers. So, I thought I would do just that. Most of the following calculations are back of the envelope in nature but should be useful in quantifying a range of potential outcomes.

The most official analysis of swine flu in the US has been done by the very important sounding President’s Council of Advisors on Science and Technology (PCAST). Apparently the US government statisticians got tired of issuing overly optimistic budget estimates and decided to make some alarming projections about the number of people who might be infected by or killed by swine flu. Here’s a brief summary from the New York Times:

Even some members of the advisory panel think their estimates may be a bit high. In any case, this is a virus that is no more lethal, and possibly less lethal, than normal flu strains.

In the initial outbreaks last spring, an estimated 800,000 New Yorkers, 10 percent of the city’s population, developed symptoms attributed to the swine flu virus. Only 54 died — an encouragingly low death rate. Most infected people got better without medical treatment.

Let’s do same math to see what this all means. First I am going to take all these estimates at face value. Who knows how many people actually came down with swine flu or how many really died in NY? There are probably thousands of people who had swine flu and didn’t even know it. There are probably just as many (if not more) who saw the news regarding H1N1 and convinced themselves that their allergies or run of the mill flu were actually the dreaded swine flu. With those distortions in mind, using the data from last spring in NY, the kill rate was .00675%. Assuming the full 120M people in the US get the flu, the government’s projections indicate a kill rate of .025% on the low end (30K deaths) to .075% on the high end (90K deaths). But if we apply the NY kill rate to the 120M figure, we get only 8100 deaths. That’s a big discrepancy. Not that 8100 deaths would not be horrible, but that outcome is a lot better than 30-90K. Let’s hope the government’s pessimistic assumptions about deaths resulting from swine flu are as far off as they are when it assumes 4% GDP growth in 2 years.

So, if the probability of an epidemic that kills tens of thousands or even millions of people is relatively low, then what is the main risk of an outbreak? According to the PCAST, it has more to do with the infrastructure available to handle millions of sick people:

The report concludes that the 2009-H1N1 flu is unlikely to resemble the deadly flu pandemic of 1918-19. But in contrast to the benign version of swine flu that emerged in 1976, the report says the current strain "poses a serious health threat" to the nation. The issue is not that the virus is more deadly than other flu strains, but rather that it is likely to infect more people than usual because it is a new strain against which few people have immunity. This could mean that doctors’ offices and hospitals may get filled to capacity.

Our health care system has not recently been tested by a mad rush of people to emergency rooms, hospitals and clinics so it is hard to know how effective the response would be. With the current state of the system I am not optimistic. However, as discussed by Naomi Klein in her book The Shock Doctrine, after 9/11 and the bird flu crisis in Asia, George Bush and Congress made it a point to allocate a significant number of government dollars to the stockpiling of vaccines. (Of course, true to form in the Bush years this was a nice windfall to the pharmaceutical companies that make these vaccines and to any Homeland Security contractors who would be called upon to help facilitate the distribution of these products.) The only problem is that the particular vaccine that (in theory) protects against swine flu is still being tested and may not be ready until October. By that point schools will have re-opened and the prospects for mass contagion will be much higher than they are now.

For the purposes of this discussion, I believe that the most important impact to analyze is that on business productivity and stock prices. If companies have millions of sick workers absent every day between now and the end of the Q1 2010, I am inclined to believe that the recent positive productivity increases may not last or at least will not be as robust. According to this data from the Census Bureau, there are around 298.8M people in the US. I have seen other data that claims this number is projected to be as high as 306M, but since this data is broken down by age it serves my purposes without much potential skewing. 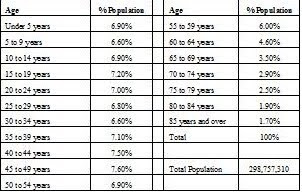 So, now let’s do some math and make some very simple assumptions. First, if the work force includes people ages 20-64 then there are 179.6M working age Americans (60.1% of the population). Oddly enough, the swine flu seems to infect people under the age of 65 disproportionately. While that certainly affects more people in the work force, it may also be a reason why there will be a limited number of deaths as younger people tend to have stronger immune systems. Despite this anomaly, I am going to assume that working age adults also make up 60% of infections; with the reduced infection rate among older people being offset by an increased rate among school kids.

So, using the estimates from PCAST, the number of workers who could become infected by swine flu ranges between 36M (60% of 60M) on the low end and 72M (60% of 120M) on the high end. Based on the July 2009 data from the BLS, the average nonfarm workweek was 33.1 hours. Thus, if each of these people were forced to take off one half of one work week between now and the end of Q1 2010, the number of lost hours could be between 600M and 1.2B. These numbers do not even include days off that are taken to take care of sick kids. If people under 20 make up 30% of infections (with people over 65 representing the 10% balance) then that could add between 18M (30% of 60M) and 36M (30% of 120M) kids out of school that need to be watched over by at least one parent. Even on the low end, if those parents were to take half of a work week off it would translate into another 300M in lost hours. You can see how quickly this toll adds up.

Now these are obviously very crude estimates. They also don’t include the impact of deaths, prolonged illnesses that require hospitalization, the decreased efficiency of sick workers or offsets such as people recovering over a weekend. However, I think when these swine flu estimates are combined with regular flu-induced sick days, there could be a sizable impact on Q3, Q4, and even Q1 2010 productivity. However, any suggestions that the fall swine flu season is similar to a grim reaper hanging over the US stock market seem to be exaggerations. Despite the initial media-exacerbated scare regarding H1N1, it does not look like it will cause an alarming number of deaths, at least not any more than the average flu. Therefore, with the Armageddon scenario seemingly off of the table, it is important to recognize that the most likely outcome is an overly strained health care system and a lot of people missing work. If we are lucky all swine flu will cause is longer waiting periods to receive medical attention, some reduction in economists' future productivity estimates, and cuts of EPS targets by a penny or two by sell-side analysts. In other words, from what I can see there is certainly no need to panic about the health implications of H1N1 or the negative derivative effects on the market.