Investors Should Listen to Their Elders 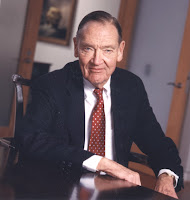 Over the past few weeks stock market participants have had the great fortune that some of this country’s finest investors and commentators have spoken up regarding their views on the global equity markets and economy. Even “retired” investors such as Michael Steinhardt and Julian Robertson have weighed in. This provides a unique opportunity to analyze how some of the most respected and often prescient investors are viewing the ongoing crisis and what they think the future will look like. With Ben Graham having passed away and Warren Buffett (and to a lesser extent Charlie Munger) having to play the role of national cheerleader regardless of what his actual views are, I believe it is incredibly prudent to listen carefully to these elder statesman of investing. Accordingly, I have chosen some written and spoken words from a group of people that, based on experience, should have unique and useful insight on the markets.

1. Julian Robertson (Interviewed in the May Issue of Value Investor Insight)

I ask anyone to give me an example of an economy beefed up by huge amounts of quantitative easing that did not inflate tremendously when or if the economy improved. I think what we’re doing now will either fail, or it will result in unbelievably high inflation – and tragically, maybe both. That would mean a depression and explosive inflation, which is frightening.

In a November 2006 interview in the same magazine, Robertson warned investors that overly indebted consumers would not be able to navigate the impending housing crisis and suggested that the effects on the overall economy could be quite dramatic. Now, a little more than two and a half years later, Robertson is again sounding the alert. This time it is about inflation and the potential for rapidly rising interest rates. In the article he even goes as far to say that the 20% interest rates the US saw in the 1970’s could end up looking low in comparison to what is in store in the near future. What is he doing to protect himself? He is buying Constant Maturity Swap Rate Caps, which basically are similar to puts on long term Treasuries. He is also looking into natural resource stocks and believes that stocks are going to be better than cash.

2. Robert Rodriguez (From his speech at the Morningstar conference entitled “Reflections and Outrage”)

Let me make my viewpoint perfectly clear, my trust has been severely shaken in the Federal Reserve, the Treasury, the Congress and the Executive branch of government in their collective judgment as to what is required and appropriate for a fundamentally sound long-term economic recovery…Governmental programs deployed to stabilize and grow the economy appear highly risky, especially those involving an unprecedented Federal intrusion into the private capital system. They have been implemented in an ad hoc fashion with little predictability and consideration for their long-term effects upon the economy…My financial market outlook is rather cautious. I believe the recent stock market rally is nothing more than a bear market rally…Many economists are forecasting an end to the recession by year end, and I have even seen one anticipating a “V” shaped recovery. If my previous comments about the stimulus plan prove to be correct, these forecasts will be wrong.

Rodriguez’s keynote speech at the Morningstar conference was, in a sense, a parting shot at the market and the fiscal and monetary leaders. He is about to begin a sabbatical that will take him away from his day to day involvement at First Pacific Advisors. However, I don’t think his scathing criticism of the authorities that have managed the crisis and very bearish comments on the market were attempts to go out with a bang. Both his most recent letter to FPA shareholders and this speech detail his legitimate concerns regarding the future growth and prosperity of the US. I think the most startling aspect, however, is his complete lack of faith in the government to help mitigate the effects of the crisis on consumers, homeowners, and the financial markets.

3. Michael Steinhardt (Interviewed on Bloomberg’s “For The Record”)

But, my sense is that we have had a terrific rally, we have had a vast amount of stuff: dollars--injections of all sorts of things into the economy--TARPs and other new programs and the ultimate effect is hard to know entirely at this point. But my sense is that this not will not change the course of what is going to happen very much: that the economy is weak, it will remain weak. Whether we have seen the weakest moment, whether we’re to decline at a lesser rate--that may be true because the rate at which we were declining was so precipitous. But I’m not sure that’s good enough. And my net feeling is that this rally does not have all that much more to go and the dangers out there remain consequential…The dangers in the economy are most everywhere.

Watching this conversation with Steinhardt was the best 25 minutes I have spent in a while. I highly recommend watching the full interview. In addition the above concerns, Steinhardt envisions a lot more pain for the US economy due to continued job losses and reduced consumer spending. He also details how distressed he is about the amount of “ugliness” we have seen on Wall Street. He is very worried that despite the change-focused rhetoric of the Obama administration, there is not enough legitimate desire to accept the short term pain required to fix the economy and Wall Street for the long run.

Probably the single biggest drag on the economy over the next several years will be the massive write-down in perceived wealth that I described briefly last quarter…This loss of $20-$23 trillion of perceived wealth in the U.S. alone (although it is not a drop in real wealth, which is comprised of a stock of educated workers and modern plants, etc.) is still enough to deliver a life-changing shock for hundreds of millions of people…So we’re used to the idea of a preferred V recovery and the dreaded L-shaped recovery that we associate with Japan. We’re also familiar with a U-shaped recovery, and even a double-dip like 1980 and 1982, the W recovery. Well, what I’m proposing could be known as a VL recovery (or very long), in which the stimulus causes a fairly quick but superficial recovery, followed by a second decline, followed in turn by a long, drawn-out period of sub-normal growth as the basic underlying economic and financial problems are corrected…We have all lost some confidence in the quality of our economic and financial leadership, the efficiency of our institutions, and perhaps even in the effectiveness of capitalism itself, and with plenty of reason.

To some extent Grantham has parted from his very bearish brethren and has actually pegged fair value of the S&P around 880. His view is that the unprecedented stimulus being provided the US government will have an initial positive effect on the economy and the stock market, potentially pushing the S&P into the 1000-1100 range. But he cautions investors that they should not interpret this as a sign of a legitimate and possibly lasting bull market. As indicated above he sees a long road to recovery because people’s confidence in the government, financial institutions, and in the stability of their own balance sheets will take years to come back.

This is the worst I have seen in my entire business career. It happens to be the sharpest market decline, the biggest…But much more than that this one seems to have had much more catastrophic, maybe economic consequences. The financials system’s misdeeds falling over into the general economy in a way that did not happen in any major way in 1973-74 or in the beginning of the-when the tech bubble bust-in the beginning of the 21st century. This is the worst break, measurably, but it has also created the most difficult economy of all of them. So the pain caused by the--I’d say the disgraceful behavior of so many in the financial system--has spread over to vey innocent people. Wall Street taking advantage of Main Street…

The malfeasance and misjudgments by our corporate, financial and government leaders, de-dining ethical standards, and the failure of our new agency society reflect a failure of capitalism. Free-market champion and former Federal Reserve chairman Alan Greenspan shares my view. That failure, he said in testimony to Congress last October, "was a flaw in the model that I perceived as the critical functioning structure that defines how the world works." As one journalist observed, "that's a hell of a big thing to find a flaw in."

On numerous occasions during the interview with Morningstar, Bogle suggests that Wall Street’s fleecing of Main Street will have a lasting impact on retail investors and consumers. According to Bogle, aside from just the psychological damage, the lack of fiduciary care exhibited by a select few led to a contagion that has poisoned the entire economy. In fact, the constant theme of the two above pieces and his recent speeches has been that the people who are supposed to protect mom and pop investors--institutional money managers and government regulators--have failed miserably in their duties.

After reviewing this set of admittedly bearish quotes and excerpts, it is important to step back and consider the context. All of these men are by nature very conservative and are unlikely ever to be seen riding a mechanical bull with Jim Cramer on CNBC. Accordingly, the fact that they are concerned about the potential downside is not a surprise. To some extent all of these investors believe in the value investing mantra of protecting against permanent capital impairment and thus are understandably cautious, especially given the recent stock market rally and euphoria over potential “green shoots.”

However, even though (as anyone who reads my columns knows) I am pretty bearish regarding the stock market and the US economy over the near term, this is not why I decided to highlight the insights from these particular investors. While I do suspect that the current run up in the market will turn out to be nothing more than a painful bear market rally, it is not these men’s views on the resilience of the market that concern me. Specifically, I have been struck and honestly disheartened by the complete lack of faith (in just about everything I read) in the government and the Fed to re-establish prosperity without either causing terrible inflation or saddling future generations with a debt that cannot be repaid.

What scares me the most is that the group of investors highlighted above, who have shown throughout their tenured careers to be able to navigate very complex markets, candidly espouse their fears regarding the policy measures being implemented. From what I know of them, none of them is prone to exhibit hyperbole or make outrageous comments for the sake of publicity. That such measured and thoughtful investors have become so disillusioned by the events of the past two years should caution investors to not put too much faith in the potential for a smooth landing in which we basically go back to how things were during the boom. In other words, despite the emerging bullishness, capital protection should continue to be the focus of all investors.