Switzerland: A Safe Haven No More?

Anyone who has been following the currency markets recently has probably noticed that the Swiss franc (CHF) has been appreciated against the Euro at a pretty sustained pace. Specifically, check out the following chart from Xorte.com. What it shows is that since last year at this time the EUR/CHF ratio has fallen from about 1.5 to 1.25, a 16.7% drop. 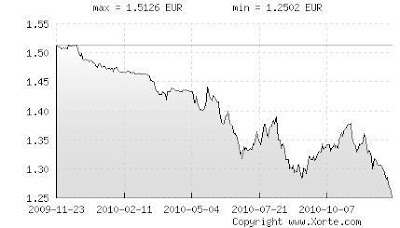 Ostensibly, the appreciation of the CHF versus the Euro has to do with investors’ perceptions of the strength of the Swiss economy relative to that of the Euro Zone as a whole. Switzerland has certainly for a long time been associated with financial stability and conservatism. Additionally, Swiss banks have traditionally been viewed as a safe haven in an uncertain banking world. But is this still true today? What would happen if the Swiss government was forced to bail out its banks again? Does it have the resources? What would be the impact on the country’s bonds?

The reason I began to think about these issues is that I was contacted by a wealthy friend and mentor of mine who owns a very large real estate company. After years of hard work, he is now concerned about US dollar-denominated assets and has invested some of his wealth into Swiss bonds and the Swiss franc. He also owns some physical gold that is held at a Swiss bank. When we started to talk about the issues that the Euro Zone faced, he asked me if he should be worried about his gold and his Swiss bonds. While I am inclined to think that his assets are safe, I do believe that the recent troubles with the European banks have caused the number of potential economic and fiscal outcomes to increase. So, while I am certainly not an expert on Europe, currencies or sovereign debt, it is not hard to justify being a little concerned about Swiss bonds and Swiss banks if some admittedly unlikely, but certainly possible scenarios actually play out.

Given that context, the following represents a brief analysis of the current state of Switzerland. My goal is not to scare or alarm anyone. I have no ability to predict how Swiss bonds or the franc will perform under different economic circumstances. But, based on my initial research, there are a few things that investors who own Swiss bonds and Swiss francs should analyze with a skeptical eye:

The good news is that Switzerland’s government debt to GDP ratio does not look disturbingly high. According to an October 2010 report from the IMF1, the 2010 baseline debt to GDP ratio for Switzerland is projected to be 39.5% and even in a low growth scenario that number only would jump to 44.5% by 2015. This is compared to 2010 baseline projections of 92.7% in the US (yikes!), 130.2% in Greece and an astonishing 225.5% in Japan. So, in the event that the Swiss needed to borrow money to help bail out the banking system, there is definitely some room to add

government debt. Although, I would make the argument that the country should do everything it can to avoid maintaining anywhere near the debt to GDP levels of the US, Greece and Japan.

I was not sure how much sovereign debt the traditionally conservative Swiss banks had accumulated but if they were like other European banks, I suspected that they had gotten stuck with a lot of Spanish, Greek, Irish, Italian and Portuguese bonds that may eventually trade at less than 100 cents on the dollar. For example, any default on or restructuring of these countries debt would force banks to realize losses on their holdings. However, according to the latest release from the Bank of International Settlements2, as of June 2010 the numbers weren’t too bad. Here is the total Swiss bank exposure (according to the BIS) to the debt of the PIIGS countries:

Now, $25.5 billion may sound like a lot, but it is nothing in comparison to the exposure of the UK banks. Specifically, the UK banks owned about $360.5 billion in PIIGS’s debt as of June 2010. This figure represents an astounding 16.6% of UK GDP that amounted to $2.175 trillion in 20094. Let’s all hope that the UK never has to bail out its entire banking system by borrowing money from investors and thus placing the burden of the private sector on taxpayers. With government debt to GDP projected to be 76.7% in 20101, the UK may not have the capacity to add much more debt before interest rates spike and investors begin to get nervous.

Take a look at this chart I found from last January on Forbes’s website5: 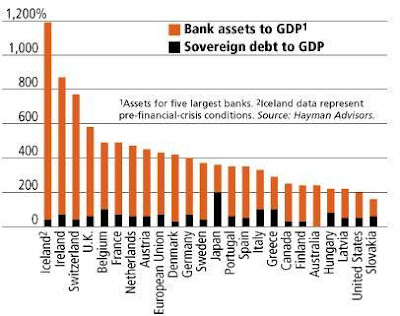 It shows that Switzerland had the 3rd highest bank assets to GDP ratio (only behind that of Ireland and Iceland!). Just eyeballing the chart indicates that the banks’ assets represent somewhere near 750% of the country’s GDP. So, if the banks were ever forced to write down more assets (sovereign debt, real estate loans, securities tied to the US housing market) they might subsequently have to be bailed as a result of their consistent inability to avoid bad assets. Given the worldwide aversion to letting bondholders lose penny, a bailout would likely require a ton of government borrowing that could represent a large portion of GDP. If the borrowing got to be too high (Reinhart and Rogoff suggest that the debt to GDP tipping point is around 90%) then the ultimate ability of the Swiss to repay their debt might come into question, an event that would certainly not be good for Swiss bonds.

The other thing investors need to think about the security and liquidity of physical gold held at the once impenetrable Swiss banks. I have heard some (admittedly anecdotal) stories recently from gold bugs James Turk of Goldmoney.com6 and Jim Rickards of Omnis7 that indicate that people who thought they had allocated gold holdings in Swiss banks have not been able to get their gold in a timely manner. The implication is that the banks either lent out or sold the gold but still continued to charge the storage fee. Aside from potentially being fraudulent behavior, these stories highlight the dangers of depending on the banks to act in the best interest of their customers.

Accordingly, I think that it makes sense for all investors to look at their arrangements with the banks and see if they have the ability to lend or sell your gold, a situation that essentially leads the bank to be short gold. In a rising price, high demand environment banks might not have the ability to locate an ample supply of physical gold. At that point owners wouldn't have the protection they wanted. As such, the recommendation from the gold bugs referenced above is to hold gold outside the banking system with a company like Brink's.

For people who still look at Switzerland as a safe haven and a suitable place to park assets, I don't exactly know what the takeaway of the information presented above should be. I guess I just want people to be aware of the downside risks. I think that it is very unlikely that Swiss bonds will be not be paid in full. While a rising interest rate environment could lead to mark to market losses on recently purchased bonds, as long as they are held to maturity investors are still likely to get their full principal back.

Furthermore, I think that there is only a remote chance that investors would not eventually be able to get their gold if they wanted it. However, as the price rises and physical supply gets tighter, there is always the risk that it might take longer than anticipated to obtain physical gold. This is always the problem with gold. It is a store of value, but it is not free to store and it is very difficult to transport and protect. Gold bulls always say that there is no counterparty risk with gold. That is true if you own your own vault. But, in the case of an investor who holds his or her gold with a bank, there is always the risk that the bank will not be able to live up to its end of the bargain. At that point, an investor might have to wait years to receive just compensation for the breach of contract and by that time the benefits he or she hoped to accrue from gold ownership may no longer be applicable.

I know we all have plenty to worry about right now but I want to caution everyone from getting lulled to sleep to by the apparent security and long history of stability of Switzerland. Just like Iceland and Ireland, it has let it banks get to be far too large relative to the size of the economy. It is probably true that if the global economy improves and the contagion in Europe never fully materializes, Switzerland is a smart place to shift dollar-based assets to. However, if there are any bumps in the road, the extremely high bank asset to GDP ratio represents a type of leverage that makes the whole financial system unstable.

Where do we go from here?

The sad thing is that I don't know where to find a true safe haven right now. I wish I did. Therefore, if I were very wealthy and running my own fund I would buy some catastrophe insurance. There are two ways to think about such insurance. The first is as a hedge against risks that individual investors are exposed to. My friend owns a large commercial real estate company so buying out of the money puts on publicly traded REITs could be a decent hedge against price and rental declines in the real estate markets. Second, investors can identify situations in the world that seem unlikely to remain static. For instance, given Japan’s projected 2010 government debt to GDP ratio of 225.5%, it is shocking to see that the 10 year JGB only yields 1.2%10. With a declining population, an interest expense that continues to make up a large percentage of revenue, and a strong Yen that is killing exports, at some point investors are going to start to get nervous that the Japanese may not even have the capacity to repay their debts.

With this in mind, here are some examples of both types of hedges:

If the world recovers and sovereign debt issues disappear, then by investing in some of the above hedges all that would be lost is what amounted to an insurance premium. With the S&P VIX as low as it is (look at this amazing chart of the roller coaster ride that is the VIX9) and clear over-optimism about the situations in the Euro Zone and Japan, some of these hedges might not even be that expensive. But, if we go back into financial crisis then investors have the opportunity to make multiples of their premiums and thus offset losses in other arenas. The point is that the perfect time to protect assets and initiate hedges is precisely when other people are dismissive of risk. This is one case in which waiting for more information or for another shoe to drop could be very costly.