Do Stocks Provide a Sufficient Hedge Against Inflation? 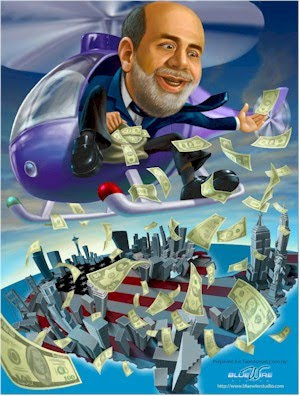 Smart investors and markets commentators ranging from Warren Buffett to Marc Faber have recently argued that purchasing stocks is one of the best ways for people to protect their wealth from the ravages of inflation. The common refrain is that certain quality businesses with pricing power and durable competitive advantages are able to pass along input cost increases to customers and therefore earnings are able to keep pace with the inflation rate.

This sounds like a logical argument and it makes sense that stocks would retain their values better than bonds and/or currencies. Clearly, domestic currencies are losers in an inflationary environment as investors holding cash are able to purchase less and less with each dollar they hold. Also, as inflation rates increase, yields on bonds will inevitably rise as central banks hike rates in order to fight inflation or investors demand higher yields in order be compensated for a drop in purchasing power. In this case, the prices of existing bonds would drop as yields rose. Some would argue that TIPS offer a degree of protection from inflation due to the return being indexed to CPI inflation. My concern is that TIPS present a glaring conflict of interest between investors and the issuer, the US government. The government has the incentive to understate CPI inflation in order to keep its debt servicing costs down. Maybe I read too much content on Zero Hedge and have become too susceptible to believing in conspiracy theories, but I would not feel secure owning TIPS knowing that BLS will do anything and everything it can to limit the impact of interest payments on the deficit.

If bonds and currencies aren’t going to defend against the inflation demon, then what about gold? Followers of the gold markets know that gold spiked from about $100 an ounce in August 1976 to over $850 an ounce in January 1980. According to this chart, that high in 1980 would be worth $2189 in today’s dollars. So, even though gold topped $1220 an ounce this year it is still far below its inflation-adjusted high over the past 30 years. But, what were the inflation rates during that period? This BLS data indicates that rate of inflation was 11.3% in 1979, 13.5% in 1980 and 10.3% in 1981. This compares to 3.8% in 2008 and a likely much lower rate in 2009 as there have been a number of negative inflation months in 2009 (based year on year comparisons). Despite recent mild inflation rates gold has gone from $500 an ounce in January 2006 to just short of $1100 today even though annual inflation never even broke 5.6% during that period. To me this past performance indicates that gold could increase significantly, even from the current levels, if inflation were to approach the 1979-1981 levels.

The problem with gold, of course, is that its intrinsic value is just about impossible to measure. Since it produces no income investors can’t use any kind of discounted cash flow method to value the yellow metal. That doesn’t imply that owning gold does not protect an individual against excessive money printing and proliferation of fiat money. It just means that it is very difficult to assess when gold is under- or over-valued. Thus, my justification for owning gold in my portfolio traditionally has been similar to that of Bruce Greenwald of First Eagle Funds:

“The hedge that we’ve had is gold, which has protected us. The attractive thing about gold is that it has no industrial uses. It’s strictly something that, when everything goes wrong, it’s going to do really well. I think people have learned to appreciate that… Mutual funds really can’t use this strategy, but good value funds are thinking about hedges, which are really forms of insurance…In our mutual fund, gold is the primary hedge.”

The idea of gold as a form of insurance resonates with me, especially given my concerns about the monetary and fiscal policy decisions that have been made over the last few years. So, I don’t look at gold as an inflation hedge necessarily. If the late 70’s and early 80’s experience is predictive at all, gold surely will do well if inflation picks up. The problem is that I have become a little uncomfortable owning gold after its huge run-up just in the last 15 months. Unlike a company that I can value using price to earnings and price to free cash flow metrics in order to determine whether there are better investment alternatives, gold offers no such measurement opportunity. Even as a form of insurance, at a certain price the cost of the insurance could outweigh the potential benefits. With out of the money puts and credit default swaps investors can estimate the worth of these hedges under a number of different market conditions. Investors in gold are unfortunately at the mercy of traders, speculators, Indian jewelry demand, commercial bank short interests and even a US Federal Reserve that has no interest in exorbitant gold prices.

So, with all of the issues with gold, I guess that leaves ownership stakes in businesses as the best inflation hedge, right? Bruce Greenwald thinks so:

“The assets that are most attractive are the franchise businesses that have pricing power, because you can pass along inflationary price increases and you are not subject to competition from excess capacity, the way you are in industries like autos and steel. You have much more control on the downside.”

I never had any reason to doubt that rationale until I picked up the December 2009 edition of Value Investor Insight. In this issue Colin Moran and Geoff Gentile of Abdiel Capital discuss their study of the impact of inflation on stocks:

“The U.S.’s last stretch of high inflation was between 1973 and 1981. In the early 1970s many equity investors, as they do now, imagined generally rising prices would make earnings grow faster, sending stock prices higher and giving investors a good real rate of return.

It didn’t work out that way. Inflation turned out to be a kind of neutron bomb that left revenues and profits standing while decimating the free cash flow available to owners. Even if a company’s GAAP earnings kept pace with the general level of prices, higher working capital needs and increased prices for capital spending meant that free cash flows failed to keep up with the price level.

Overall, inflation and taxes together stripped public-company owners of more than 100% of their reported profits from 1973 to 1981. We measured that by tracking the book value per share of companies in the Fortune 500, which compounded at 10% per year over that period, adjusting for share repurchases and including the after-tax value of dividends paid out. Someone who bought a business in 1973 and sold it in 1981, in both cases for book value, would have actually lost ground. After capital-gains taxes, the investment would have doubled, but over the same period the overall price level more than doubled.

And most owners would probably have done worse. Having for years failed to produce real returns, businesses traded in 1981 for less relative to book value than they did in 1973. As a result, stock prices grew more slowly than book values. The S&P 500 added only 3% annually during this stretch – again including the after-tax value of dividends – but since inflation compounded at 9% per year, stocks’ real value declined 40%.”

Wow. A 40% decline is pretty ugly and seems to fly in the face of the often quoted benefit of stock ownership as espoused by Buffett and Greenwald. If stocks didn’t protect purchasing power, then what about bonds?

“Treasury bills, reinvested every three months from 1973 to 1981, compounded at 8% per year. Long-term government bonds bought in 1973 and held to maturity delivered less. Assuming total state and federal taxes consumed a third of the interest income, Treasury bills ended up delivering a 5% after-tax yield. Cumulatively, these “risk-free” Treasury bills lost 30% of their real value. It's worth emphasizing that tax-paying investors need to compound way above the rate of inflation just to maintain purchasing power. If prices are stable, any positive return gives you a positive real after-tax return. But if inflation is 10%, a investor paying taxes needs 15-20% returns to keep wealth from losing its purchasing power.”

Yikes. A 30% loss in real value is better than the 40% loss that stocks experienced, but neither did the job of protecting purchasing power. Did anything do well over this period?

Gold and oil compounded in the low-20% range in the period. Residential real estate also rose slightly faster than the general price level; and the equity of homeowners with mortgage rates set in the early part of the decade obviously rose faster than the assets themselves. Not all stocks are losers in an inflationary environment. The 25 highest-ROE companies in the Fortune 500 compounded book value at 15% annually from 1973 to 1981. Warren Buffett compounded Berkshire Hathaway's book value at around 20%. In general, businesses that could support a fair amount of leverage, had decent pricing power and had limited capital needs did well. We expect the same to hold true if inflation rekindles in the future.

It comes as no surprise to me that an investment strategy focused on high quality, high return companies served as a reasonable form of protection. It comes as even less of a surprise that value investing as practiced by The Oracle of Omaha was the best of all the strategies.

What should investors conclude from all of this data? Well, at first blush it looks as though gold and oil could potentially be viable inflation hedges, given that the current price does not already reflect future inflation expectations. The problem with both is that there is almost no way to know what is embedded in the current price. Inflation concerns? Supply-demand imbalances? Geo-political fears? Irrational speculation? Accordingly, I think the data corroborates what Buffett and Greenwald have been stressing recently. But that does not mean that blindly owning a stock index is going to be a saving grace. Instead, investors need to focus on buying shares of companies with conservative management teams that are prudent capital allocators and that have sustainable competitive advantages. It is my belief that such stocks purchased below their intrinsic values and with a sufficient margin of safety will always offer investors the best opportunity to compound their wealth irrespective of the inflation rate.