Cyclical Positives vs. Secular Headwinds: Which one is winning the war?

-Bob Doll of Blackrock on Wealth Track with Consuelo Mack

Although I am usually skeptical of the musings from the men and women who run large institutional funds, I thought this comment from the man CNBC calls the Trillion Dollar Man (based on the size of the asset portfolio he helps oversee at Blackrock) was a great description of the dynamic that has led the debt and equity markets around the world to recover so dramatically. Usually, when you hear these people talk about their outlook for and assessment of the financial markets, they are simply espousing the pre-determined strategic views of their firms. Under the guise of giving advice to non-professional investors about where to invest their dwindling wealth, more often than not they are talking up their own book. In other words, when Bill Gross says that US Treasuries are the place to put your money, you can bet that PIMCO has made a large bet on Treasuries. Or when Bob Doll suggests that he is bullish on US equities despite his admission that there are severe secular headwinds facing the economy, you better believe that Blackrock is putting its mouth where its money is (as opposed to the other way around).

What is most interesting about Mr. Doll’s commentary is the dissonance between the long run and the short term and what that implies about his firm’s willingness to bet that short term government stimulus and Fed zero interest rate policy will drive equities higher. I have to admit that is disconcerting to hear people who are supposed to be managing your money with a long term perspective basically making a trading call based on government largesse and Fed money printing. What retail investors don’t want is to be invested in funds that are trying to get every last penny out of what could be the mother of all bear market rallies. The reason is that in the long run, if the secular concerns that Doll references are legitimate, they will undoubtedly overwhelm any government attempts to reflate the asset markets. One of Ben Graham’s most important observations was that in the short run the market is a voting machine but in the long run it is a weighing machine. My concern is that the weight of the numerous headwinds— rising health care costs, lack of funding for social security, dependence on foreign fossil fuels and foreign purchases of debt, continued housing weakness, consumer de-leveraging, and a crumbling education system—will prove to be significant impediments to US GDP and companies’ earnings growth.

My suggestion is that you don’t want to be on the wrong side if/when the secular trends start winning the war versus the cyclical positives. The Fed and government actions over the last year potentially helped the US avoid another depression and thus won a significant battle. The problem is that the war is ongoing and there is substantial risk that the policy decisions that have been made (and maybe more importantly, not made—wholesale reform of the financial system comes to mind) may have only made the war tougher to win. What would be an example of the Fed’s and government’s actions starting to lose? Check out this chart on CPI for the month of September over the last 60 years (hat tip to David Hui Lau for sending this out): 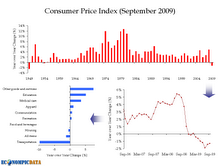 Notice anything unusual? How about the fact that when compared to September 2008, September 2009 was only the third September in the last 60 years to produce a negative CPI number? I don’t have the direct source used in the chart but if you are skeptical you are welcome to peruse the latest release from the BLS.

Even though this is what the BLS calls an unadjusted number and the main reason for the drop in the CPI has to do with a fall in the prices of very volatile food and energy components, numbers like these probably keep Helicopter Ben Bernanke up at night. We know his greatest fear is deflation and negative CPI numbers are not to be confused with disinflation, defined as a slowdown in the inflation rate. The Fed is literally trying to create modest inflation by keeping interest rates near zero and by expanding its balance sheet. Numbers like these suggest that even with all of the money printing, the Fed is not having a whole lot of success in inflating anything other than stock and commodity prices. My personal take is that one of the reasons for this is wholesale deleveraging across the economy. Consumer credit is less available. Commercial loans have dried up. The shadow banking industry that grew so large as a result of rampant loan securitization has basically disappeared. The cumulative drop in available credit as a result of the financial crisis appears to be (at least in the short run) more than the Fed can handle when it comes to creating inflation. If you don’t believe me, there is plenty of data from the St. Louis Fed that tells the same story: 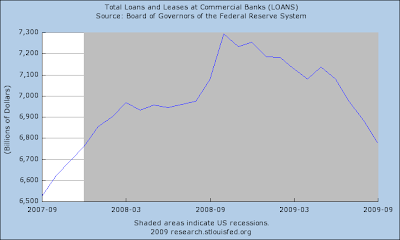 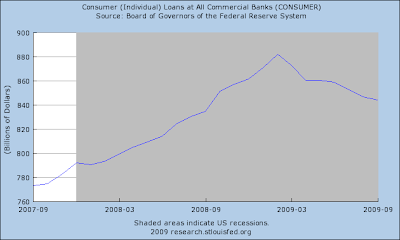 I think you get the idea. The important question is what does it all mean? I think it means that as investors we have to be skeptical regarding the ability of Fed liquidity and government stimulus to sustainably get the economy back on its feet. I continue to believe that there are major structural imbalances in the US economy. We built too many houses, malls, restaurants, banks and car dealerships. The service and housing sectors may have gotten unsustainably large and it will take time to work off those imbalances and for workers to find other means of employment.

To be fair to Mr. Doll, he obviously has some concerns of his own as well. But, I do not think awareness and admission of the problems absolve Mr. Doll from making what has to be considered a trading call on the continued willingness of the government to prop up the economy in the short run. I am not a trained economist and I am certainly not smart enough to know how this all will play out. My goal is just to call it how I see it and to advise caution when it comes to investing. Even if you completely disagree with me or think my analysis is off base, as long as I have given you reason to think about the other side of the argument I feel like I have added value.

In closing, the takeaway is that I am not sure I agree with Mr. Doll that the cyclical positives are actually winning the battle versus the secular headwinds. The stock market sure thinks so. The price of commodities sure thinks so. But my fear is that the stimulus packages and easy money policies have basically just been an attempt to paper over the long term issues and get the economy back to pre-crisis levels of output without doing anything to help fix the aforementioned imbalances. Therefore, my advice is to be careful when it comes to making asset allocation decisions based on the reflation trade. The Fed and government may have won the battle that prevented another Great Depression, but the war is still raging and the tide may be turning.